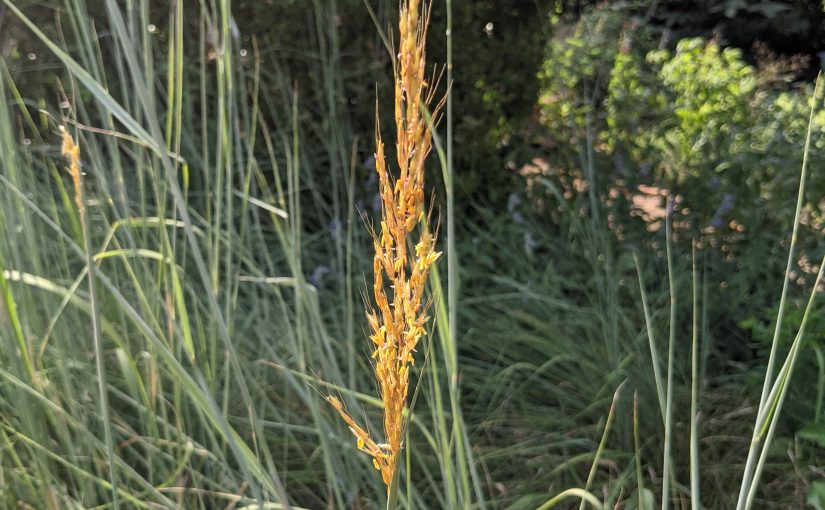 When we had our pool put in recently the bulldozer shredded a large part of the yard much of it on a hill. I built a flowerbed and was looking for something to be a visual back for the bed.

I wanted a grass that could hold its own and mostly keep weeds out, but I’ve pretty much gone through what’s sold in local nurseries. I’ve had decent success with Big Muhly, but it’s slow growing. I’ve had almost no success with Gulf Muhly despite my absolute love of the plant.

I’ve had some luck with growing Little Bluestem and Switchgrass from Native American Seed, so I decided to give another one of their seeds a try.

Indiangrass is supposed to be one of the main components of a tallgrass prairie. Native to prairie from Canada down through Mexico. It’s between 3-6 feet tall (but more on the 3 feet side). I sowed it on the side of our hill in very disturbed ground last year. The first year was… fine. It was not a particularly interesting pant and I was thinking of other solutions.

This year has been different. It really came into its own as a lovely green grass with a gray tinge to it. And then this week it began blooming. It’s amazing. I’m in love. More of us need to plant this.

I sowed them in November so now is a good time to start planning. In a stand they are dense and struggled with weeds the first year, but now seem to be competing very effectively. You can pickup some for yourself from Native American Seed.

This site uses Akismet to reduce spam. Learn how your comment data is processed.