Since adding the pool we’ve suddenly gotten much closer to the flowerbeds that are furthest from our house. And they’re… acceptable. Lantana, giant liriope, and trees share the space with some weeds that have the sense to grow low enough that I don’t see and pull them.

I also recently decided that it was time to start removing some of the boxwoods in my backyard. There were three in this bed that were just… there. I also removed a mostly dead Cherry Laurel that had been dying since the drought of 2011. You could literally see through a crack in the trunk. It finally went.

So I decided that was the flowerbed for the plant sale. I even did a diagram.

The sale had a lot smaller selection than I expected so my salvia arizonica became some mealy blue sage transplanted from elsewhere in the yard, and I added some Heartleaf Rosemallow to the left of the Harvard Penstemon, but otherwise I stayed pretty true to the design.

I even took some before: 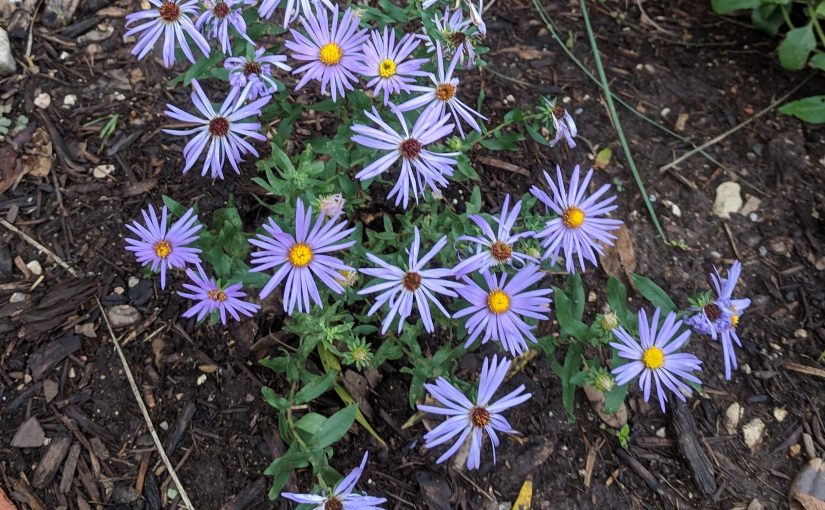 Recently two friends of mine got married in my backyard. The rains were dicey and only ended about 10 minutes before the wedding started, but everything could not have looked more beautiful.

That said, I planted a row of Fall Aster along the edge of the flowerbed. The plants were full of buds. Everything looked ready to fall into line. And they bloomed a week after the wedding. Plants, they care about seasons and sunlight and nothing for what we have going on in our lives.

In any case, they’re looking fantastic right now and I’m really enjoying them.

We’re hosting a wedding in our backyard in a couple weeks. One of the things that I felt was most in need of attention was our shed. It was still the same ugly gun metal gray as when we bought our house. The shed is in the original renderings of our house and I think the paint might be original as well. It was in rough shape.

In trying to think of a picture to illustrate the before-and-after I was thinking of this picture of when the kids were small.

In my memory the shed was so dominant and ugly. It is clearly not as dominant or ugly as I remember. Just the only thing in the picture that isn’t completely lovely. In any case we decided to recreate the picture.

Most of the trees in the first photo are gone, and new trees have taken their place. The kids are bigger. . And you still don’t really notice the shed.

So here’s the before:

And the after with one of my helpers.

We plan to eventually paint the trim white, but we’ll see if that project ever happens. Maybe in another decade…